I have wanted to try making something using an Atmega 328p without having to purchase an Arduino specifically for the job. The Arduino Uno costs around £20 (the official Arduino, that is), so using one for a permanent project is costly. In contrast, an Atmega 328p can be bought for under £2, with associated circuitry being only around an extra £1 or so. If bought in bulk, then the price goes down. (EDIT August 2018: Third-party “Arduino” Nanos can now be found sub-£2 if bought in bulk and without the hassle of soldering multiple components together)

I followed a tutorial on the Arduino website that shows the basic circuit for an Atmega 328p. This can be programmed using an Arduino Uno. There are some methods on how to program the chip using an external programmer (at extra cost) or by removing the chip from the Arduino Uno itself and placing the 328p to be programmed in its place (which I imagine would eventually fatigue the Uno chip holder causing mechanical failure). However, I prefer the method on this website that allows the Arduino to be used without pulling out the chip and risking damage.

It also features an alarm buzzer, which gives audible feedback on the proximity of an object to the sensor. The sensor has an alarm range defined. If the range is entered (let’s say the object is within 100 cm of the sensor) then the buzzer begins to beep periodically. As the sensor approaches an alarm distance (let’s say 10 cm) then the buzzer beep period gets smaller until eventually the buzzer plays a continuous tone. This is a bit like those sensors on the back of cars to help the driver park without crashing.

I decided to make use of one of the external interrupts on the Atmega chip. I linked it to a button that allows the user of the device to set the alarm distance. If you want to start the buzzer beeping at 150 cm, and set the alarm distance to be 50 cm, then move the sensor until the display reads out 150 cm and push the button. The indicator LED will flash showing that the distance is in the process of being set. Move the sensor so that the distance reads out 50 cm and press the button again. The indicator LED will now stay on to show that a custom setting has been recorded and is in use. To cancel and revert back to the hard-coded default values, just push the button and the LED will go off.

If you would like to make this, you will need:

There wasn’t very much thinking behind the value of the 220 and 330 ohm resistors. By all means, replace the 220 ohms with 330 ohms (or vice versa) if you have more available. It will make little difference to the circuit. Also, it will make no difference to this circuit if you replace the 21 resistors connected to the 7-segment display anodes with just 3 resistors connected to the common anodes, due to the way that the program operates them (by multiplexing). I only did it this way because I wanted to future-proof the circuit in case I wanted to change the program.

Below are some pictures of the sensor, along with the schematics if you wanted to build one yourself. I soldered the components onto stripboard and mounted onto some MDF. I used a glue gun to stick a battery onto the MDF – a bit crude, but I’m not looking to win any awards. This project is only an excuse for me to test out the Atmega chip and to give soldering onto stripboard a go.

For the seven segment display, I used the Arduino Seven Segment library. Unfortunately, this only works for a 4-digit display. I have used 3 individual 7-segment displays together to form a single 3-digit display (I only used three because the distance that I want to display only goes up to 500). I modified the code (SevSeg.cpp and SevSeg.h) to work for three segments. All files can be found on my Github. Just paste it into text files in a subdirectory of your Arduino Libraries directory called SevSegThree. 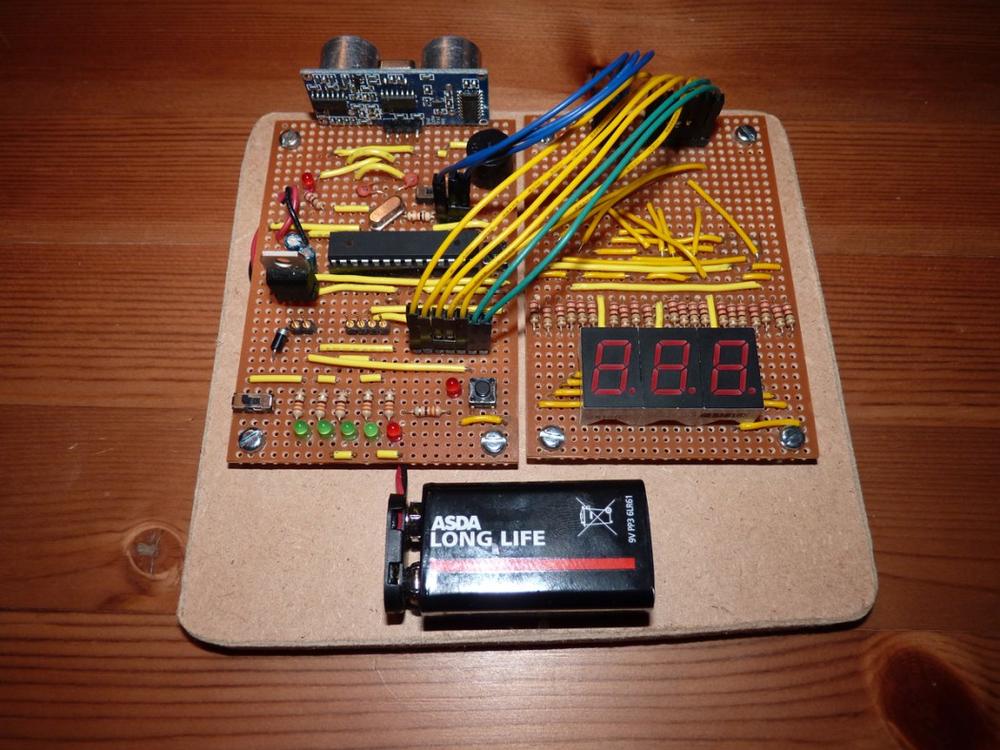 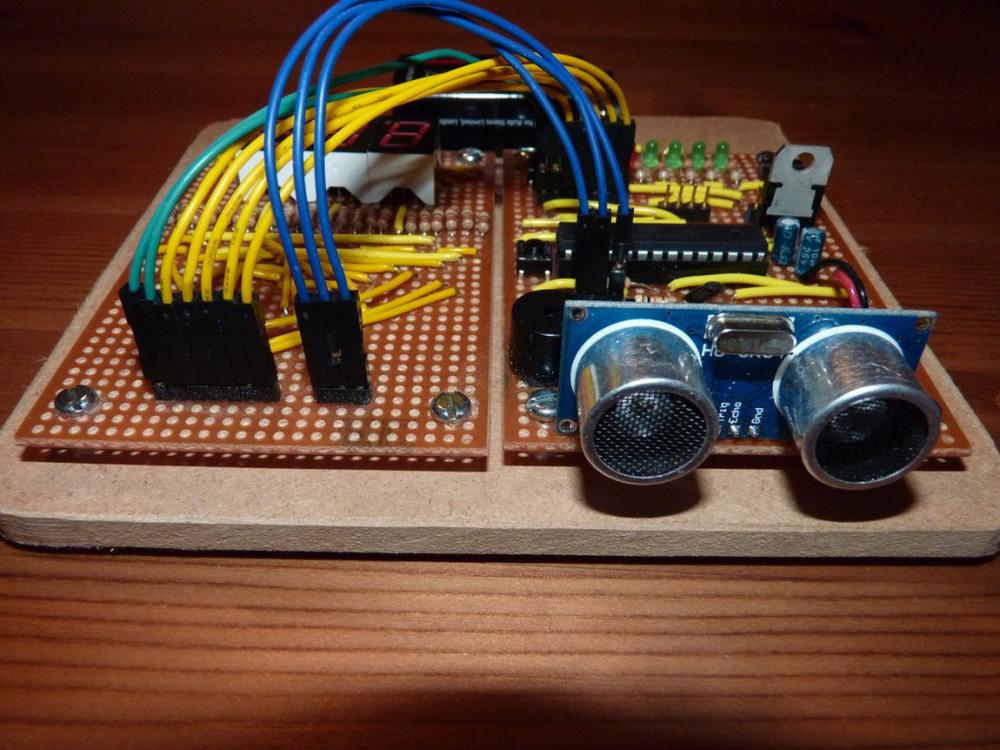